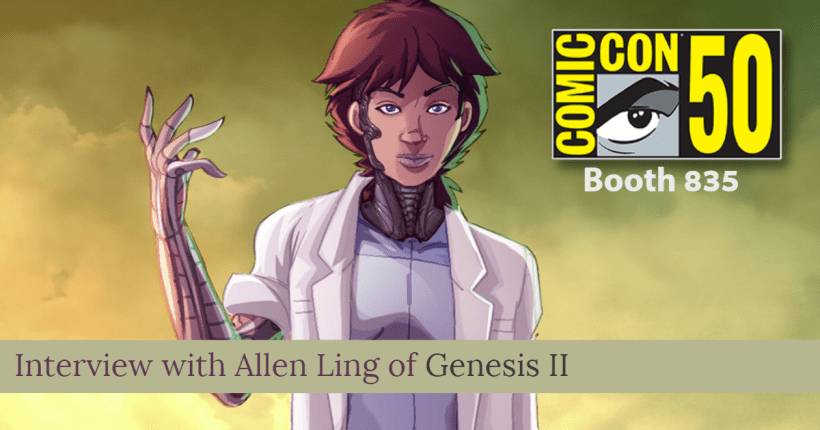 Allen Ling and Genesis II are back in San Diego! (Booth 835)  The Genesis II crew not only brings their amazing book but their booth is always a huge hit.  This year expects to be no different as they have an actress/model Betreal Mahari in a full body cyborg costume.  Let’s catch with energetic and inspiring Allen Ling…

What are you looking forward to this year at San Diego Comic Con?

I am down to making more new fans, seeing the old ones, and showing off some new chapters of Genesis II and some other new comic series that are for mature audiences.

Last year you guys stole the show with your amazing installation, what do you have planned this year?

We have an actress/model Betreal Mahari wearing a custom cyborg costume made by Steven Wang and company  (Onyx Forge formerly Alliance Studio) who designed the iconic creature for “Predator” and doing many of the statues for “Blizzard.”. I’ve included some of the pictures of the challenging process making the costume.

Since last year Genesis II led to some new ventures, can you tell us the latest with you and Genesis II?

We are working on a screenplay/teleplay with Desmond Chiamfor Genesis II! Spring-boarding off this exciting endeavor, I’ve started my own comic book publishing company “GenSeven Comics”  and came up with a 3 new series of comic books.  Then, I spun off a new production company called “AlKimy Creations” down in Hollywood with Kimberly Boyd, who is a film and TV show producer, to use that as a way to help other ambitious creatives formulate and even pitch their ideas.

We’re also excited to hear about your screenplay, how much can you tell us about it?

Transferring comics and graphic novel ideas to the big or small screen isn’t simple. So it takes a brilliant writer and super nerd like Desmond to turn Genesis II into something that will work for both.  It takes about 3 months to do about 120 minutes of screenplay writing, and that’s if it all goes smoothly and Desmond isn’t interrupted with too many other jobs.

For you what sets SDCC apart from all the other cons?

It’s the Queen Bee and the Academy Awards of all Comic Cons.  Only the best of the best are here, as well as the veterans.  It’s better organized than the others and the communication between all the Comic Con staff with all the moving parts going is amazing!